What's the big deal in moving 3000 miles away to pursue your dream? You just have to convince your wife to leave everything on the east coast behind and that moving with three small children will be a piece of cake, without a job or place to live. That's exactly what I did in the Spring of 2011.

I started learning about wine at the first restaurant where I waited tables in New York City. I had been to wine tastings before in Wisconsin, where I went to college and grew up, and was extremely intimidated by the process. There were so many smells and tastes that my uninitiated palate couldn't perceive. You can imagine the horror of starting a new job in the biggest city in the U.S. and walking in day one to find my coworkers tasting wine. In time, I developed my taste buds and nose and really started to enjoy the complexities that wine offered. It also wasn't hard to figure out that if I knew more about an expensive bottle of wine and was able to sell it, my tip got bigger. I eventually made my way into restaurant management and then specifically to the beverage program, all the time learning more and more about wine. I was encouraged to join the Court of Master Sommeliers and begin my training to becoming a sommelier. After a year of studying and tasting I was able to take the Introductory and Certified level exams within several months of each other. Upon certification, I was the sommelier and beverage director at Blue Water Grill and Blue Fin of the B.R. Guest Hospitality Group, the general manager of the Mermaid Oyster Bar, and the sommelier for the Standard Hotel Meatpacking District. In 2008, I had the extreme honor of being part of the Washington Wine Commission's Road Trip Washington Wine, a whirlwind tour of Washington wine country with stopovers in all the major viticultural areas of the state. I think the a-ha moment came while tasting Grenache Blanc grapes in the middle of Boushey Vineyards and drinking a glass of McCrea Sirocco Blanc made from that vinyard's grapes at sunset. I remember thinking that I could get used to this. It was that moment that gave me the winemaking bug. Back in New York, I made a point to try as many Washington wines as possible and even dedicated entire sections of the wine list to these wines I had fallen in love with. During a tasting at the Mermaid Oyster Bar with Ron Coleman of Tamarack Cellars, he told me about the Center for Enology and Viticulture at Walla Walla Community College. With a little research on the phone and internet and a lot of convincing of my wife, I decided to apply to the college and take the big leap to move from New York, NY to Walla Walla, WA.

When we arrived in W squared, I had no job, but luckily I had plenty of contacts within the wine business. After a meeting with an old colleague from New York, I was presented with a sweet offer: Don't go to school, but we'll give you a job and teach you how to make wine. When a Master Sommelier gives you that offer, it's hard not to pass up. That's when I started working in the tasting room and cellar at Gramercy Cellars. I was also put in charge of their nascent wine club. After studying wine only in restaurants and books, I realized that I had no idea what the production side of the wine business entailed. This was the beginning of a fantastic learning opportunity. I got to learn the business and production side of a winery and put my customer service skills from restaurants to good use. After two and half years at Gramercy, I decided to enroll in the WWCC winemaking program and began working for an extremely talented winemaker, Aryn Morell, as a production assistant at M&L Production. I was very fortunate to have Aryn allow me to work and go to school at the same time while he shared his massive winemaking knowledge.  At M&L, we make over 60 different wines for 6 different clients.  The practical experience of making that many wines with an amazing winemaker combined with the academic experience of schooling was exactly what I needed to take my knowledge of winemaking to the next level.

In the spring of 2016, Aryn approached me with an announcement that would bring everything together. He told me that we would be starting a new employee benefit program. This new program allows any employee to start making their own wine at our facility after two years of employment.  What a grand coincidence that I had just had my two year anniversary! All I had to do now was start lining up fruit sources and barrels and I'd be in business.

THE LOGO & THE NAME

Ever since I had been getting more and more involved with wine, I had dreamed of starting my own winery.  Along with this dream came the arduous task of coming up with a name. It had to be easy to pronounce, look good on a restaurant wine list, and have meaning.  It took almost three years to come up with a name that I liked. I would go back and forth on names and could never really settle on one in particular.  Then one day, I simply looked down at my forearms and it hit me.  The clock and the compass tattoos are of my own design and are full of symbolism and meaning for me. The hands on the clock point to 1:02, the time my daughter was born and the face has her initials and birth date written on it.  The compass is a reference to my family and is the reason that I work as hard as I do.  The letters on the points may look like directions but are actually our initials and the symbols in the middle are our astrological symbols.  Combining the two gave birth to Time & Direction, two components essential to any journey in life.  All you need is some time and a little direction.

Thank you for checking us out! 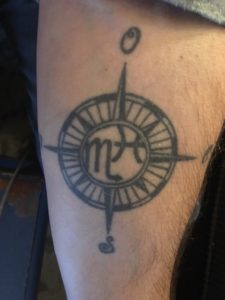